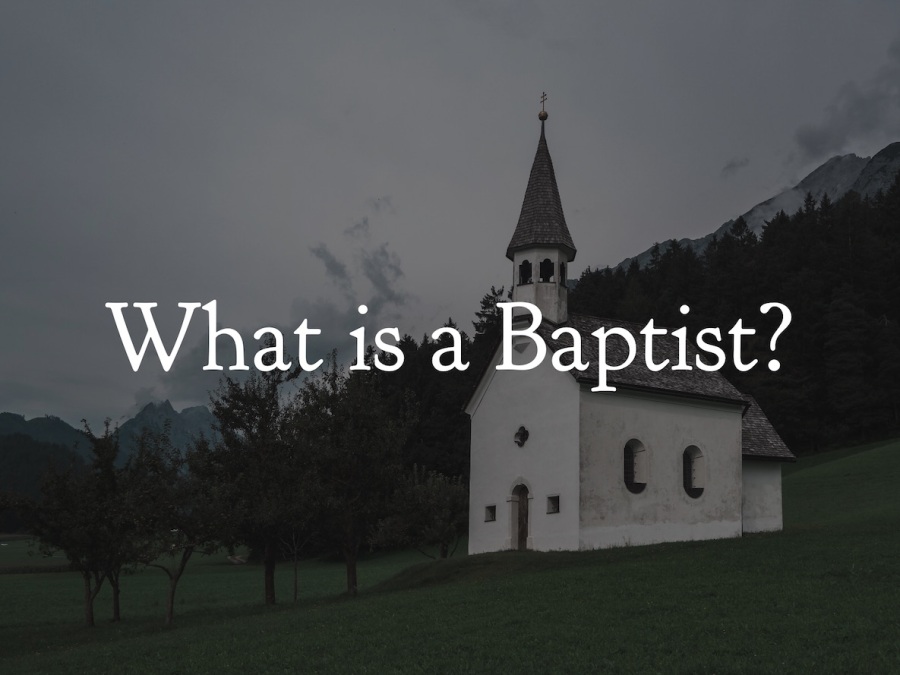 Many times when people ask the question, “What is a Baptist?,” they’re looking for certain qualities that distinguish Baptist groups from other denominations. But to look for distinguishing characteristics of Baptists is a question of “Baptist distinctives.”

The definition of a “Baptist,” however, includes far more than our distinguishing doctrines and practices. What it means to be “Baptist” involves the whole of “Baptist identity,” which includes everything Baptists believe. So, the question before us is “What are the basic elements of Baptist identity?” “Baptist Identity” is an interconnected web of doctrine that leads to Baptist distinctives. The first three major headings below come from the introduction of Tom Nettles’s masterful work, By His Grace and For His Glory: A Historical, Theological, and Practical Study of the Doctrines of Grace in Baptist Life.

1. Baptists are Orthodox. Baptists hold to the historic symbols of orthodoxy, including the Nicene Creed, the Creed of Athanasius, the Apostles Creed, etc. These classical creeds confess Trinitarian theism and biblical Christology. Baptists, along with all orthodox Christians, believe in the Trinity, that God is one in essence and three in person. We also believe in biblical Christology, that the incarnate Christ is two natures, a divine nature and a human nature, united in one person. We believe that Jesus Christ came into this world to save sinners through His death and resurrection.

This means it’s impossible for liberals, who deny the deity of Christ, but affirm water immersion, to be considered Baptists. Orthodoxy has been an indispensably interconnected part of Baptist identity from the beginning.

2. Baptists are Evangelical. Orthodoxy inevitably leads to being evangelical, when the Christ of orthodoxy is believed from the heart. Evangelicals are not formalists, but consciously and personally adhere to and love the God of orthodoxy. Evangelicals are centered on the gospel, which declares that God in Christ redeems poor sinners by free grace through His life, death and resurrection. Evangelicals understand that they are justified by free grace alone through faith alone because of Christ alone, not by their own good works. And the truths of complete forgiveness of sins and graciously imputed righteousness inevitably lead to love for God, repentance of sin, and a total-life reorientation to God that issues in humility and love for others.

These doctrines completely undercut all sacrementalist systems of theology, since Christ alone saves, not the sacraments, the church, or the priesthood. These glorious evangelical doctrines also lead to a deep missionary impulse, since those so graciously converted by God’s free grace long to share their hope with others.

3. Baptists are Separate. Baptists believe that orthodoxy and evangelicalism naturally lead to separation from the world. Separation means that only those who love the one true God (orthodoxy) from the heart (evangelical) are the people of God. This doctrine shapes Baptist ecclesiology (the doctrine of the church) and distinguishes Baptists from evangelical Paedobaptists, including Anglicans, Presbyterians, Methodists, Congregationalists, and so on.

Tom Nettles rightly says, “The true Separatist position, endorsed by believers baptism, affirms that the local and visible church exists only as a community of gathered believers and opposes the idea that the church exists as those born into the state or is associated with true believers as a part of their families without personal regeneration” (By His Grace and For His Glory xxi).

4. Implications of Baptist Separatism. The doctrine that the church should be separate from the world and thus composed of believers only has a number of important implications.

First, the church only grows through evangelism. The church cannot grow by natural generation or by military conquest. Souls must be converted through the gospel of Jesus Christ in the sovereign hand of the Holy Spirit. People must voluntarily love Jesus Christ from the heart, if they are to be counted among those who belong to Him. This is why Baptists have always been a missionary people.

Fourth, separation of church and state is required. Since the church should only include believers, the state must not determine its membership, confession or forms of worship, since to do so will pollute the church and mingle it with the world. Neither the church nor the state has any authority to coerce belief, church attendance, or otherwise force the consciences of human beings in any way. Therefore liberty of conscience and religious liberty are implied by separatism. Baptists believe that the biblical ideal is a free church in a free state.

Fifth, all of this rules out infant baptism. Baptism, the sign of the new covenant, should only be applied to those who from the heart confess and love the God of orthodoxy. The children of church members should not be added to the church involuntarily. Including unbelievers in the church will necessarily populate the church with people who do not love God and do not love orthodox truth from the heart. The inevitable result of paedobaptism will be (and has been in history) the loss of orthodoxy and the loss of faithful witness to Christ.

Sixth, only a believing church can retain an orthodox confession of faith. Only a church that is separate from the world can possibly hold on to biblical orthodoxy. Historically, paedobaptist churches were unable to retain orthodoxy (Trinitarian theism, Nicene Christology, etc.) and slipped into liberalism. But when the church is separate from the world, and composed of members who all credibly confess faith in Christ, it more closely approximates a regenerate church that loves an orthodox confession of faith, embraces it wholeheartedly and defends it against attack.

Seventh, the goal of a separate church is pure worship. The reason the New Testament teaches that local congregations should be composed of believers only is for the sake of purity of worship. When the church gathers to worship the Lord, He calls on us to worship Him from the heart in true faith and love for Him. That is impossible, unless the church is composed of true believers.